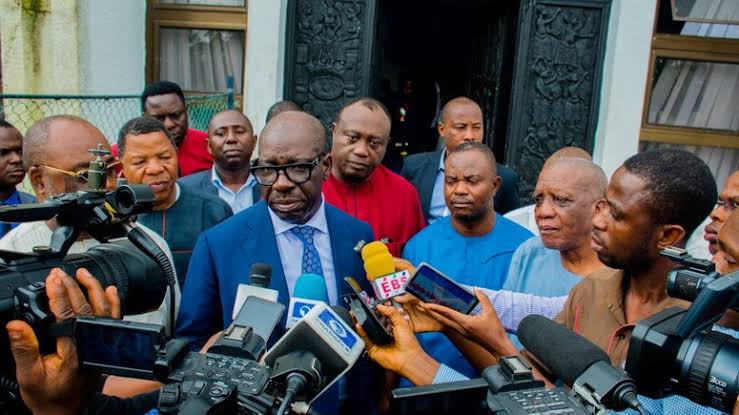 Edo Governor Godwin Obaseki arrived the National Secretariat of the Peoples Democratic Party(PDP) a few moments ago for screening.

Recall that Obaseki decamped from the All progressive Congress to Peoples democratic party on Friday and got a waiver to contest for elective posts on its platform.

PDP had already screened Gideon Ikhine, Ogbeide Ihama, and Kenneth Imansuangbon for the primary slated for Tuesday in Benin, capital of Edo.

Obaseki whose convoy touched down at exactly 2.50PM local time was accompanied by a mammoth crowd of supporters singing his praises to high heavens.

Decked in all white attires with a red facecap to match, Obaseki moved straight to the National Working Committee, NWC Hall, venue of the screening exercise.

Meanwhile, the Governor Aminu Waziri Tambuwal-led PDP Governors’ Forum had wished Obaseki God’s blessings and guidance as he subjects himself to the forthcoming primaries of the party.

He extended solidarity and support to Obaseki and assured him all of accommodation and level playing field.